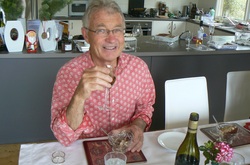 I had four years at Melbourne University, 1 year law and 3 years commerce (along with Ray Walker and Terry Lee). I played football with those two and Bob Patterson for Kew Amateurs.

After University, Iived and worked in London for five years and also Canada for about 18 months. Ray Walker stayed in our flat in Hampstead for some time.

Mid seventies returned to Aus. Enrolled at Melbourne State College and got Diploma of Education. A bit sick of office and accounting work.

1976 posted to Queenscliff High for one year after which I taught at a Geelong High school (Bell Park).

1985 landed a job at the Geelong TAFE (Gordon Institute), mostly in the adult programs and advanced diplomas for Deakin University. Retired at 58 in 2002 to start a window restoration business with a mate in Queenscliff. Finished that a couple of years ago.

Still in Queenscliff, our two kids both have houses in Point Lonsdale, James is a science and maths teacher (Bellarine High School). George is primary teacher at Corio in Geelong.

Vicki's sister lives in UK, so we have travelled a lot over the years. But I'm a bit over that now.

I have been blessed with very good health, apart from some angina last year which led to a double bypass last July. I remain very active and continue to enjoy my passion for surfing which I've been doing since I moved to the coast. The whole family surfs and swims, and it is a particular delight to share wave riding with the kids. I am a bit lucky to still be able to ride waves at my age!

Have not seen any BHS people since I left Melbourne in the seventies, so August 16 will be a real catch up for me.