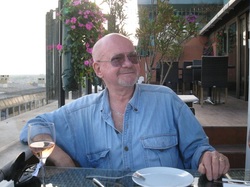 I was actually a ring-in at the 2012 reunion, having matriculated in 1961, but I had heard about it from Doug Beattie, and was also still in touch with Kath McKay (née Semmel), having been a schoolfriend of her late brother Ian, so invited myself along.  We all used to go out to jazz dances on the weekends, dangerously crammed into a pre-war car driven by an older friend – remember Q-Club, Jazz Hut, etc.?  I was very much into folk, trad jazz and blues then.  In fact, many years later, another alumna of BHS, Liz Aird, dubbed me ‘the biggest jazzer in Balwyn High’, a badge I wear with pride.  I do still love the blues.

Because I had dropped French at Leaving, I wasn’t eligible to do Arts at the University of Melbourne, so went instead to Monash, then just a sprinkling of buildings in muddy pasture, much as Balwyn High had begun.  Actually, I remember watching BHS being built from the playground of North Balwyn Primary School, where I had started off as a foundation student in 1950, another muddy initiation.  1962 was only Monash’s second intake, and the small number of students (a total fewer than BHS at the time) made for a unique university experience and excellent esprit de corps – I still meet with many of the colourful characters who were my peers in that era at occasional reunions we have at the Notting Hill Hotel, where I mis-spent a good part of my youth.

Accordingly, I graduated with a pretty ordinary BA, and being bonded to the Education Department, then did a Dip Ed, and went out teaching in technical schools.  But soon after, having discovered I had a true academic interest in Sociology, I enrolled in an MA part-time at La Trobe, and never looked back.  I went on to complete a PhD there, and as much to my surprise as anyone else’s, ultimately ended up as a university professor.

I spent most of my career at Victoria University, the former Footscray Institute of Technology, but after many years was awarded a research fellowship that took me to the University of Melbourne, in 2005.  I am since retired, but still professionally active with research grants and publication contracts.

Along the way, I have been married three times, and been father to two gorgeous daughters, the elder of whom has brought into the world my golden grandson.  I stay fit, I sail and scuba dive, and travel at every opportunity – eventually, I have this work-life balance thing worked out.  It takes a while.