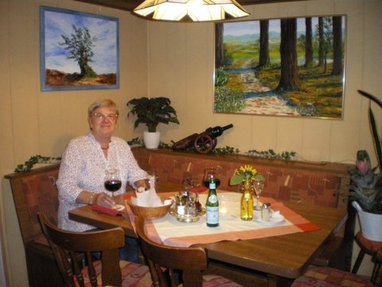 After BHS, I went on to Burwood T.C. (2 yr. course) teaching the obligatory 3 years of primary school and saving for "The Big Trip to Europe", leaving on the P&O liner "Oriana", 1968. During my year's stay, I worked at two Scottish school camps (as one of the many Aussie & Kiwi "Colonials"...) . After a short return to Melbourne, I obtained a studentship for the Waldorf School Seminar in Stuttgart Germany (1969). This was a one-year course, followed by teaching at the Frankfurt W.S.. As I was given a 4th. grade class teacher slot (teaching all subjects in German: the school was desperate) instead of the position for which I had applied as an English (subject) teacher, the strain of teaching German to German children, especially at that level, was too great and I searched for work as a teacher where I could teach in English. This I found at the US Army elementary school in Hanau (up to 1800 pupils in the late '70's & '80's) near Frankfurt, in 1972 as a "Host Nation Tr.". All I wanted was to be able to earn my return flight to Aussie. (the meagre pay at the W.S. had forced me to use up my savings).

However, I enjoyed this job; teaching German culture and some language to about 400 pupils each year, taking the classes (Grades 1 -6) on study trips, arranging Youth Hostel trips etc. so much, that I stayed on.... and on.... I married a German (1977) and after my divorce (1988) I found that my prospects in Aussie with the Education Dept. no longer matched this job. I took up painting as a hobby (sanity therapy?) as well as drawing some local sights (at first only on the chalkboard for my lessons) which my American colleagues later bought as  souvenir cards & pictures, when they moved on... As I was employed as a "Local National" with the US government, I was the only staff member to stay put for 34 years. With talk of this US Base being closed down, I was offered a separation which I accepted and took early retirement in 2006. By now the European lifestyle had grown on me to the point that, with both my parents having died in Aussie, I have chosen to stay on in Germany. Its proximity to France & Italy may also have influenced this decision... In my little village a small number of us have formed an art group which has motivated me to paint more seriously. We have had some successes at local art shows and various little markets but I really just enjoy dabbling in oils, pastels or water colours.... and Life.