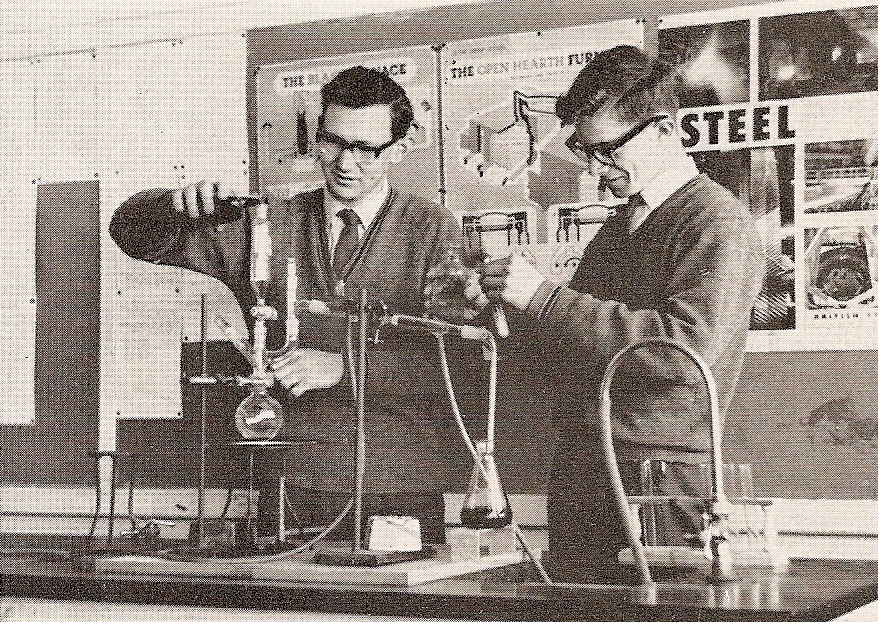 My memories of my time at Balwyn High School are generally warm.  There was always the odd unhappiness or frustration, but they tend to be forgotten in the long term.  A few random thoughts

·         In our early years there always seemed to be another block being built.  This created mud and restrictions on playing areas, but we boys always managed to find somewhere to play cricket and football.

·         There were quite a few teachers recruited from the UK.  Presumably they were post-war “ten pound poms”.  For some reason I really resented one of their insults which was that the student they had in the gun was “ill-bred”.  This was a typical English class-based put-down and I thought it was just over the top.

·         One of these teachers from the UK taught music and had a very strong Scottish accent.  I think her name was Mrs Buchanan.  I was told often enough to “looook at your booook Cooook”.

·         We had several teachers very keen on corporal punishment, though not with a cane or strap.  One nicknamed “Butch” really took to a student a few years behind us and landed in hot water.  These days he would have ended up in gaol.

·         The Senior Master for a few years was Mr Dawkins, nicknamed Daddio.  At one stage he took offence at a student or students who left the core of their green apple in the yard rather than putting it in the bin.  We were often regaled at how he had nearly caught the green apple eater.  It is most likely that there were several green apple eaters.  A couple of enterprising students a year ahead of us balanced a green apple core on his doorhandle once, and we didn’t hear much of the green apple eater after that.

·         Daddio also had the habit of kicking down the corridor any bags not put properly in the rack underneath the lockers.  The same couple of enterprising students who taunted him with a green apple core left a bag out in the corridor with a couple of bricks in it.  I think that cured him of the kicking habit, at least for a while.

·         Boys had to wear those stupid caps, theoretically to and from school, and at assemblies.  Most of us folded them up and kept them in our back pockets to put on only when we were under surveillance, or at the assembly.

·         For a fortunately short time, boys were also prevented from removing jumpers or blazers, even when it was very hot.  It was supposed to be uncouth to be in shirtsleeves.  Talk about stupidity!!

·         The creek was still there at least in our early days.  I can’t remember when it was put into a pipe, but I think it was during our time at the school.  It was strictly off-limits of course, but that didn’t stop everyone.  On the other side of the creek was what was basically a wetland, and I can remember catching tadpoles there in the winter.  This area was later drained and levelled and turned into playing fields of Macleay Park.

·         We played an inter-school football match on the main oval when it was all mud and water.  We had to change in the open on the steps of the “grandstand”.  The other school was very unimpressed, and of course there were no showers to clean up afterwards.

·         I can remember washing some teacher’s cars at some time.  I don’t think this was punishment, but I can’t remember the circumstances.

·         I can also remember some students putting potatoes in the exhaust pipes of a couple of teacher’s cars – the cars couldn’t start.  Again I don’t remember the circumstances, but it did cause a bit of a stir.

·         Looking back I feel that girls were not given the same encouragement or expectations of academic success as the boys.  This reflected the prevailing attitudes of the time – at that time women had to resign from the public service once they got married.  However it was a real shame, and I wonder what the academically clever girls in our cohort thought about it at the time, and subsequently.  Do they now feel they were disadvantaged, as they undoubtedly were?

·         A number of our teachers were not properly qualified to teach at secondary school, and several were doing their degrees part-time.  I remember Mrs Robbins a maths teacher and a single mother was in this position.  She had a son at North Balwyn State next door, and he had to wait for her to finish class after getting out of primary school.  He caused her some angst from time to time.

·         Mrs Millie Campbell was a history teacher in our early years.  Her method of teaching was to start writing notes on the board as soon as she got in the room, write a single line right across to the right hand side, and then trot back to the left hand side and start another line.  She was largely oblivious to the chaos behind her.  She taught ancient history – basically Greek and Roman history, and I’ve never been able to summon much interest in that era since.

·         It was rumoured that one of the female teachers posed nude for an advanced (girl) art student.  It was never confirmed to the best of my knowledge, but it certainly captured the interest of us hormone-driven boys.  The teacher’s main interest was art, but she had to teach English due to shortages.

·         Miss McMillan was the Senior Mistress I think for all our time at the school.  She kept the girls on a very short leash in regard to uniforms.  She was pretty fierce.  I don’t think I ever had her as a teacher, which was probably fortunate for me.

·         A number of our teachers were really very good, and I enjoyed the interaction with them in the senior years.  Mr Mee, Mr Ronan, Mr Miller and Mr Brighton come to mind, but there were others I now can’t recall.  Mr Miller went on to lecture in first year biology at Melbourne University in 1963, where some of us met him again.

·         I know the humanities stream students also had a number of really good teachers whom they respected.  Mr Wise and Mr Martin were two who I can still remember

·         Mr Onyans was a very popular sports master.  I remember one sports day kicking the football as high as I could and it came down right on his head.  I was not popular.

·         We had some pretty good sportsman and women in our group.  Diane Kerr was a very good sprinter, Gary Johnston a gymnast, but he didn’t go to matriculation, Bob Patterson and David Albiston very good footballers.  Bob was a really good cricketer too, but he didn’t go through to matriculation either.  Peter Keller and his older brother John were terrific tennis players.  I expected to follow their career in the media, but they must have given tennis away.

·         I was bell boy for a couple of years in our junior years.  That meant walking out of class to ring the warning bell 5 mins before the end of the period and then a double bell at the end of the 40 min period.  The switch was just outside the Principal’s office.  I blame that job for an excessively time-conscious personality!!  I also had to have an accurate watch.

·         We boys played kick-to-kick football at lunchtime in the footy season.  Two large mobs of boys would stand about 30-40 yards apart and kick 3 or 4 balls towards the other group.  There was a mad scramble to get hold of it when it came to your end.  I can’t remember where the balls were kept, or whose responsibility it was to return them to where they were stored.  In the summer there was usually a scratch game of cricket.  However given the numbers it was pretty hard to get a bat or a bowl.

·         In stark contrast to the present day, virtually no one was driven to school.  You either walked or rode a bike, and there were plenty of bikes. I suspect there are hardly any bikes these days.  One day I was riding down Tivey Parade to school, and came across an accident where a schoolkid riding a bike had ended up under the wheels of a Council truck.  It was pretty traumatic.  It turned out he wasn’t a Balwyn High School student, but I was a bit more careful on my bike for a while.

·         Lots of mostly boys but I think a few girls had jobs before or after school – delivering morning or afternoon papers, or delivering medicines for chemists.  You got much more money delivering the morning papers – up to £1 per week.  I got from 7/6 to 12 shillings delivering the Herald in the afternoons – depending on the number of papers for the round you were allocated to.  You had to supply your own bags for holding the papers, and that was usually a sugar bag begged from the grocers, cut in half and sewn at the open end.  It fitted over the bar of your bike.

Overall it was a pretty good education – good enough for me to go to university and subsequently get a Ph D.  The only real hiccup was matriculation chemistry where our inexperienced teacher managed to get a significant area of the curriculum wrong.  Those reading this who also did chemistry will know what I mean.  I failed chemistry and had to struggle at university with first year chemistry.