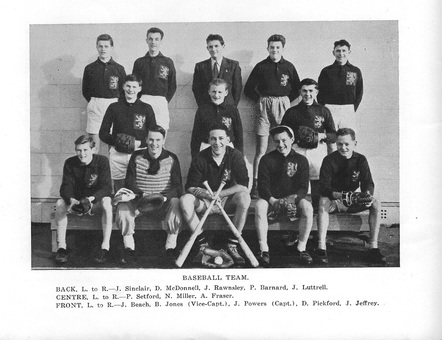 I wrote this originally for the 50th jubilee of BHS in 2004 and have merely added a few more memories.

North Balwyn before the High School was built I went to Deepdene Primary for one year before we moved to Balwyn and I then went to Balwyn Primary School. When I was in the third grade in 1950 the school was partly burnt down. The third, through to sixth grades, had to be relocated. The rebuilding took years and years. Each year we went somewhere else to school. In either the fourth or fifth class, we were located in the newly-built North Balwyn Primary School for that school year. This was my first contact with North Balwyn.

On the steep part of Balwyn Rd, going north from the Belmore Rd corner, there used to be cart-racing once a year. And where the Gordon Barnard Reserve now is (yes he is my grandfather; he was Curator for Camberwell City Council for a number of years, curator being head gardener) used to be the Camberwell City Council rubbish tip. It was a smelly place with a fire always smouldering somewhere.

Balwyn High was, I think, one of the first new schools built to cope with the sudden growth of school-age children, of both Australians and immigrants, after the war. It was also one of the first permanent non-brick schools in Melbourne.

It looked very makeshift to us in those days. I remember that the walls were made of pre-formed concrete slabs, and very good for sharpening pencils.

The opening - the very early days

In the sixth grade of primary school we had to put down our three school choices for secondary school. Those who had a technical leaning put down Box Hill Technical as first choice; most of the rest put down Camberwell High as first choice, or Mont Albert Central. (central schools had a year 7 and year 8 which primary schools didn’t have). What no one knew was that the Education Dept had decided to create this new High School to cope with the housing development in North Balwyn and Doncaster areas.

The school was supposed to be ready for the start of the school year in February, but wasn’t naturally.

The first half year we shared the East Kew Central school buildings with their students. Balwyn High had the ‘morning‘ shift and East Kew Central had the ‘afternoon‘ shift. We had our 8 periods between 8 am and 12:30 pm. And they had their 8 periods from 1 pm to 4:30 pm. As we went home at 12:30, we didn’t need a lunch break and the other breaks were shortened. The periods themselves were shortened from 40 minute down to 30 minutes to fit in 8 per day. And sport got left out of the plan.

I had a fairly long way with the bike; down Yarrbat Ave and Gordon St to the old Outer-Circle Railway and then along the old railway track to East Kew. In those days there was no path along the track and many piles of garden rubbish to navigate around.

When we finally moved into our school, the building workers still around as they hadn‘t finished everything, and the school ‘grounds‘ were still a building site with mud everywhere.

We started off with just two wings. The domestic department was in the lower one. The upper wing was built a couple of years later. Covered walkways between the buildings only came a few years later.

The school kept expanding so much over the first years that it seemed normal to have building works going on .

Miss MacMillan was a crotchety spinster in our opinion - she came to the school in my fourth year, taught English (?)

Mr Norman was a very strict teacher; we were all frightened of him. He came from Camberwell High from the beginning and taught Latin and English. Only the original Form 2 students took Latin. It was never offered to the new Form 1s.

Miss McKenzie was one of the original teachers who taught German. I think we were only offered German when we started, and French only came a few years later.

Mr Westbrook was my form teacher in Form 1 and 2. He taught woodworking and art.

I had Miss Graham and then Miss Townshend as form teachers in Form 3.

Mr Wise was my form teacher in Form 4. He taught English Literature.

Mr Mc Burney was my form teacher in Form 5

Mr McCance was the Science teacher.

Miss Townshend was the music teacher and I think she composed the school song.

I think our Maths teacher was called Mr Murphy.

And that’s about all I remember of them.

I had a newspaper round that kept me busy every afternoon after school. And the weekends were taken up with scouts activities or doing other things with my friends from scouts. I can’t remember having much to do with anyone from school.

We had two periods of sport a week; the last two periods on Wednesday. I had decided on tennis. We were using the tennis courts in Balwyn Rd, on the up-hill side between Yarrbat Ave and Winmallee Rd. I always tried to get out of class on the bell, on to my bike and quickly off to the tennis courts. There were more students who wanted to play tennis than there were courts available. Which meant those who played first could go home after their game. And then I could begin my evening newspaper round earlier. And maybe fill in another round if someone else didn’t come. I seem to remember that we had dancing lessons in the St Silas Church hall when I was in 4th or 5th form. I think we had a School Social or two. Perhaps someone else can confirm that. Church dances were very popular in those days and there was a circuit of nearby churches that we went to each weekend.

The good things When I was in the sixth grade at primary school I remember sitting for a test, and being surprised to see my name in the Sun in January. I had apparently qualified for a school scholarship which paid for most of my school books. This was much to the relief of my parents.

I was lucky in having an excellent memory. I seldom did any homework, only when it was absolute necessary to avoid trouble with the teachers. Without much effort I was usually first or second in the class each year.

The school did not have a canteen at the beginning but there was a van that came each day and parked in front of the school and sold meat and fruit pies and probably other things that didn’t interest me.

In the fourth and fifth year we still had a paddock that stretched from the domestic wing down to the creek. The creek separated the school grounds from Myrtle Park playing grounds. The school had just bought a motorised mowing machine (a two wheeled thing with a cutter-blade in front) Alan Beebee and I had volunteered for garden duty. We had great fun mowing down the high grass, and thereby annoying the groups of boys or girls who had been looking for privacy in the high grass. No one ever thought that snakes could come up from the creek.

I avoided these as much as possible. A photo has turned up of me in the school baseball team which I find amusing as I cannot remember playing baseball either for a club or for the school. It must have been a short case of ‘insanity’. This now seems quite funny when I consider how much sport I have done since leaving school.

I remember the whole school went a couple of times in hired trams to the Olympic swimming pool. I think these trips were for inter-school competitions.

I originally wanted to be a doctor because it seemed to be an impressive occupation. We had to select new subjects for the third form and I took CPP (Commercial Principles and Practice). Then in the fourth form I had to go into hospital. There I saw that being a doctor was lots of work and not all that glamorous. So I decided being a Chartered Accountant had the right touch, especially as maths and CPP were easy subjects for me.

In the first five years we had a big paddock that stretched from the domestic wing down to the creek. About two-thirds of the way down there was a huge gum tree. I remember we were once visited by a group of aborigines who demonstrated boomerang-throwing by throwing their boomerangs around this gum tree and up and over it.

I must have looked very scruffy; ‘sailors‘-trousers (seven folds in them to keep them out of the bike chain), a baggy pullover (instead of having a bag for my lunch and any books, I used to stick them under my tucked-in pullover when riding my bike to and from school), and a folded school cap.

Boys were required to wear their caps outside the school grounds. Lots of the boys always had their caps folded in their hip pockets. Which meant the caps didn’t look very smart when finally unfolded and worn on the back of the head.

I can’t remember anything about them so I probably didn’t go. I do remember getting a book prize “Digger“, a history of the Australian fighting forces one year. I think it was Form 4.

Geography in Form 5 included field trips. In fact I am pretty certain the photo in the Jubilee calendar for November was taken on one of the trips, to the Melbourne harbour.

Exams were never a problem for me. I remember the excitement of comparing notes after the exams, when everyone wanted to know what answer I had, especially in Maths.

Getting to and from school

I used to ride my bike to and from school. We lived on the corner of Yerrin St. and Yarrbat Ave. Going to school was mostly downhill. Coming back home was more strenuous.

Quite a number of students came with a school bus from Doncaster/Templestowe area.

I still have my Pupil‘s Record Book‘ as I only decided not to return for Form 6 just before the school year began and so never returned the book. There is noted that I was first or second in Class or Form in all years. In only one term in the five years at school do I remember studying before the exams, and that was only because the others ‘egged‘ me on.  The 91.4% over 7 subjects was 10% more than the next in the class, so why try hard, I asked myself, you’ll be first or second anyway. I even managed a Fail in English Literature in the first half of Form 4, and still came 1st in the class.