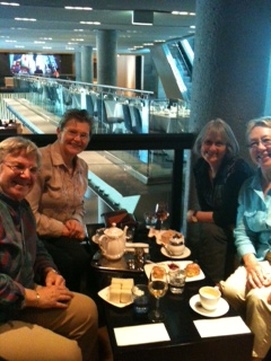 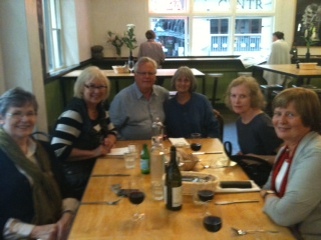 On November 21, a group of us gathered at the CAE cafe in Flinders Lane for a farewell lunch for Julie Asker before she returns to France next week. Another great day of conversations. Left to right: Kath Semmel (McKay), Marg Voutier (Wilson), Brian Stagoll, Pam Heath, Julie Asker (Marland), Sandra Young (McComb). (Not pictured but there, Helen Miller). 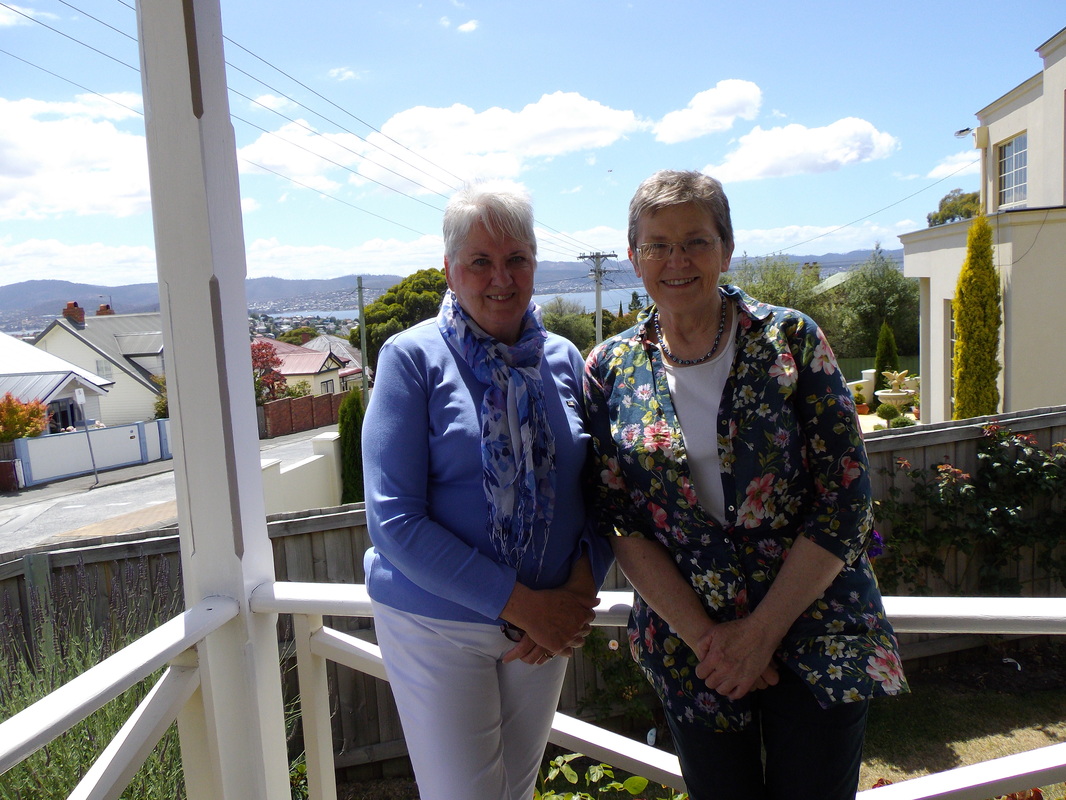 Another meeting of old friends

A note from John Braddy 4 February 2013:
For those concerned about Graham Braddy, contrary to popular belief he is alive and well in Perth. I had not heard from him for some years but he rang the other night and assured me that he certain was still alive and chuckled when I told many thought he was no longer with us.

I am sure he would love to hear from his old school mates.

It is a great privilege and honor to be back here. I have always had strong attachments and loyalties to BHS. This feels like coming home.

I had lifelong contact with Mr Arch Rogers after whom your Assembly Hall is named.  He led the way to BHS becoming a top High School.

I was very pleased to help organize our 50 year reunion last October. We were worried we wouldn’t find any body or nobody would show up [would everybody be dead!]….but over half of the Class of 1962 came to a great night and graciously attended by Ms Herman and Ms Harris.

Our reunion started with a visit to the school and everybody was deeply impressed and proud of what BHS has become. This was the school we wished we had gone to – but it was our school too. There was a continuity of culture from our time and we were deeply affected.  It set off what I call “ a reminiscence binge” of that intense period of our lives that you are now going through.

And as we connected again with our old classmates we discovered that many of us had contributed to changes in Australian life that made us all the better off.  I hope you can continue the tradition.

Let me  just note some of the people from my class:  Our Dux went off to become an early partner in what is now Australia’s biggest accountancy firm; our head prefect is now Australian over 65 Tennis Champion; we had a leading activist for women’s liberation; a highest ranking public servant who implemented major reforms in Housing and Homelessness; Australia’s leading seed scientist; the first woman to lead a major Australian publisher; a Hawthorn grand final player who became a high school vice principal; a leading environmental lawyer; a pioneer in computer applications for Tourism and Hospitality; a leading restauranteur who set up  Chaucer’s, the first Function and Convention Centre in Melbourne.  The list rolls on….some had quieter achievements but all had a story of community service and commitment.  The stories are now on the web so you can have a look. Everyone links their stories to their school experience in different ways.

When  MS. Harman  asked me to speak today I must say I was a bit panicked. What could I say, how could I not come across as ponderous and pompous, an old fart. Probably what you thinking right now. [I am a psychiatrist and supposed to read minds!]

But I’ve always believed ,as your dux Krystal just  advised, never be afraid to ask  for help and do your research. So I went to my co -alumni of 1962 and asked what to say. Here are some of the things.

The school had been hastily built in 1954, one of several suburban high schools started that year, a response to the  Baby Boom.  It was never finished, there were always noisy building works around the temporary prefab rooms. It was cold and leaky in winter, sweltering in summer. Down the hill was an old garbage dump and if the wind blew east we had a rotten stench. No assembly Hall, no sports fields, no fence lots of mud.

But a school is much more than its buildings. (They do help though) .A school is a set of relations where everyone learns to live together and care for each other. This is what my class mates recalled.

2. They also pointed out that school was a place we met people we had never known. In those days Australia ,and North Balwyn particularly ,was a very homogeneous monoculturally Anglo) place. We had a White Australia policy, and the first Asian I ever met were at BHS: boys from the Colombo Plan, a post war economic program for educating students from SE Asia.They educated us! They were good guys (all boys) But they had to go home afterwards. This was White Australia in action. Later many of us protested against this racist policy. My first demonstration was in 1961 outside Kew Town Hall against White Australia.[ It was not my last!]

We also met Jewish students whose parents had survived the camps in Europe, and boys from the Legacy Hostel whose fathers had died in the war. And many others. This was our introduction to other cultures and our first network where we learned about tolerance and openness and internationalism.

It stayed with us.

3. The school had 961 students, half of today and 52 teachers (one quarter).There was a  general shortage of teachers and to tell the truth many were untrained and incompetent- although of course some were brilliantly inspirational.  But there was no staff/student code of conduct, no student feedback or complaints process. But we just put up with it whatever  happened and sometimes, occasionally, there was what today we would call ‘abuse’.  You just sucked it up. But it did leave us all with a sense of the importance of fairness and due process and justice.

4. The school was coeducational in name only.The girls and the boys were kept apart…with separate areas and no mingling.  Even the women teachers ( who were paid 2/3rds of the male wage) had a separate staff room.  It is no coincidence that a number of students  became leading feminists.

The Boys assembly outside was often an occasion for raucous behaviour, especially on cold days. Rebellion would stir but soon be put out.

But it was an innocent time. As someone said “No drugs, no sex, lousy Rock n Roll” The Beatles were still to come.

5. Our subject choices were limited. You either did Straight Science, or Arts ,or Commerce. I wish I had been able to learn French or study History. And there was virtually no music (imagine that at BHS!) .Still I didn’t feel deprived of the skills necessary to go on, and nobody expressed this. I suppose we did learn about independent study. But it did leave us with wanting to change the system and make it better.

I was lucky enough to be the first student from BHS to get into Melbourne Medicine. Nowadays I might not have made it…My ATAR would have been in the 80s. But we got there and it opened a new world. My classmates all said it was a shock leaving school and it never turned out as we expected. We all had surprises and meltdowns – everyone has meltdowns.[Plan for two in year 12:  have a hot chocolate and and a day off,  and don’t panic].  But we bounced back. For myself I ended up marrying a girl from a Jewish refugee family, and after medical school and a Royal Melbourne Hospital residency I went to New York for 5 years to finish my specialty training. I had no idea in year 12 I would go that way.

I’ve been in both private practice and community health for 40 years .I’ve just helped finish a book on Community Health which I’ll leave for the library.

Psychiatry is about helping people move on from their troubles  by using whatever helps: mostly talking, working with families, helping reconnect to community, sometimes medication.

I try not to give direct advice  but rather help people find their own solutions. [So no advice today.] Except to say the most important thing is to talk, to listen and to connect. You can’t do it on your own. You put things together with other people. So keep in mind what is most important to you and join in with others. That’s enough.

I want to finish with some words from Barack Obama, which he gave to students at a Commencement Ceremony in 2008,at Wesleyan College.

“ Our individual salvation depends on collective salvation. Because thinking only about yourself, fulfilling your immediate wants and needs, betrays a poverty of ambition.

Should you take the path of service, should you choose to take up one of these causes as your own, know that you’ll experience the occasional frustrations and the occasional failures.  Even your successes will be marked by imperfections and unintended consequence. I guarantee you, there will be times when friends or family urge you to pursue more sensible endeavours with more tangible rewards. And there will be times w here you will be tempted to take their advice.

But I hope you’ll remember, during those times of doubt and frustration, that there is nothing naïve about your impulse to change the world. Because all it takes is one act of service- one blow against injustice- to send forth what Robert Kennedy called that tiny ripple of hope. That’s what changes the world. That one act.”

That’s a good note to finish on. I hope you can all enjoy and celebrate every year until your 50th reunion in 2063. 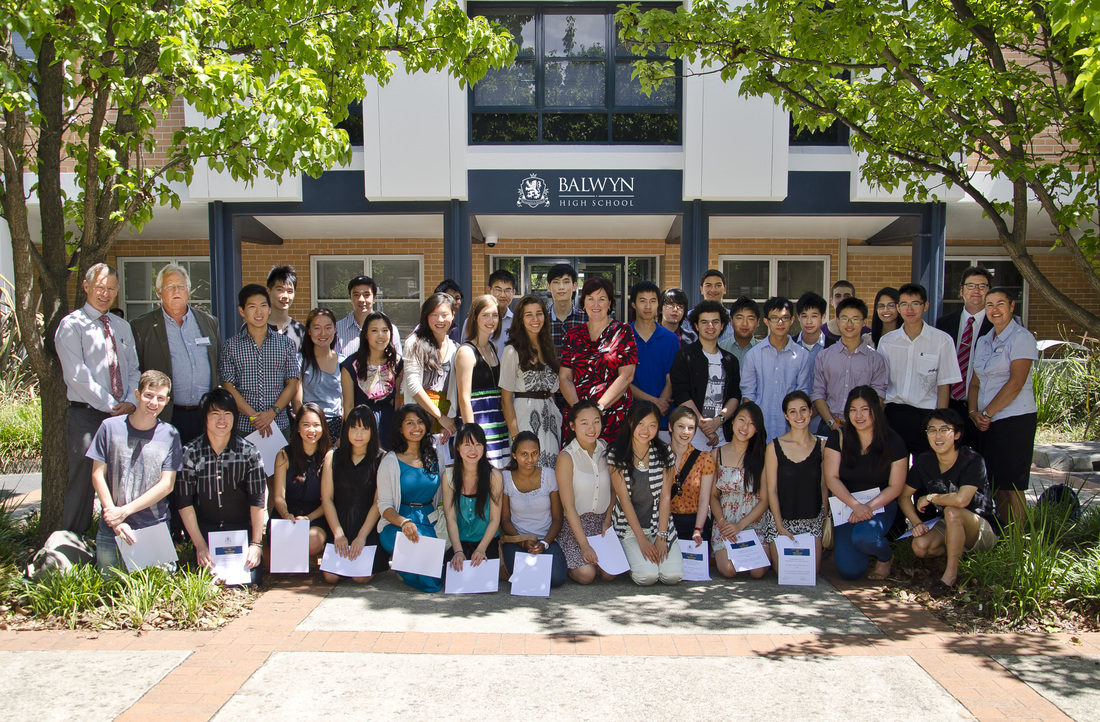 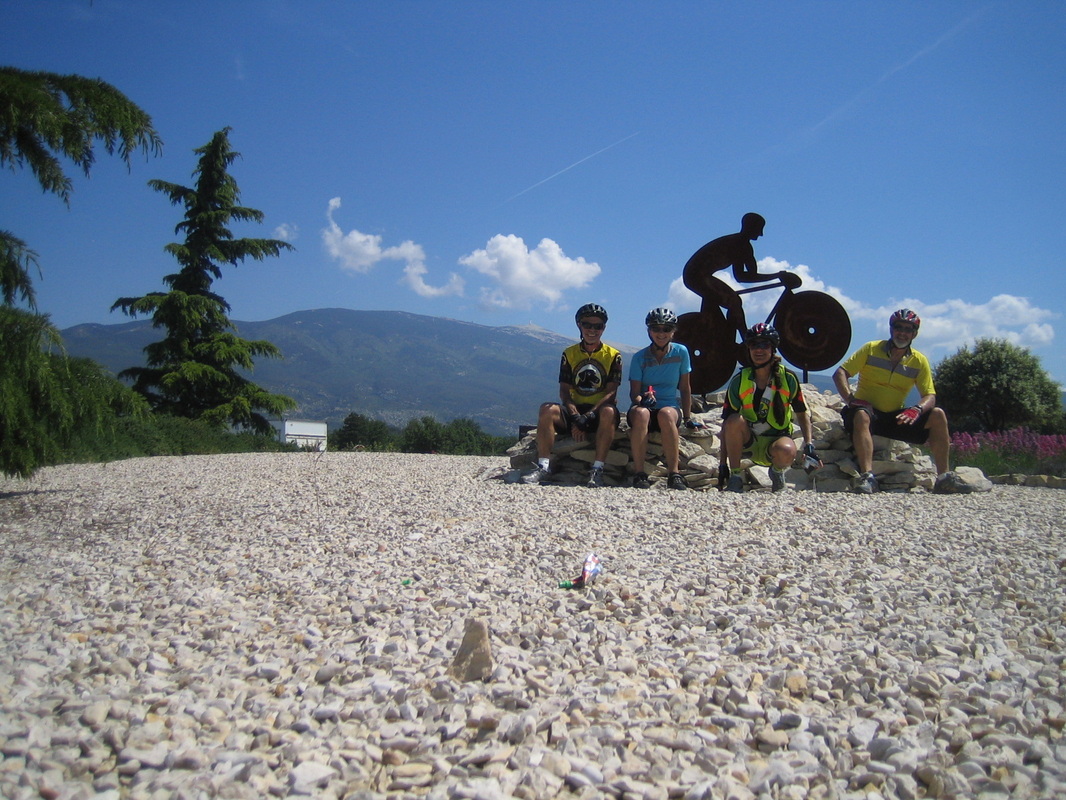 Message from Peter Winford, apologising for not being able to come to the 14 July lunch because he is in France. "Photo is of me about to find out if I can handle an 1850 metre climb (Mt Vonteaux). I could but only just! I would recommend anyone to cycle in Langedoc and Provence Regions" Peter, June 2013
Other years
From time to time, students from years other than those we began with (which was 1957 to 1962) have contacted us through the website to make contact, share memories or contribute photos. Such students are welcome to make contributions, particularly those who came before us. For instance, Paul Barnard came to our gathering in August 2014 and was most welcome. Patsy Gould has just contributed a photograph of Form 5C from 1960 and I have posted it in the 'Photos and Memories' page. Many familiar faces but most names are missing. If anyone can add names to the faces, let one of the 'organising mob' know.
Kath McKay, 24 June 2015