I came to Balwyn High after five years’ teaching at Macleod High School 1957-61. In one of those years I was involved in a head-on collision while driving home from school one day, which left me comatose for the next two weeks, with hampered mobility and a permanent limp. (The truck-driver was jailed for drunken and dangerous driving.) I was on the teaching staff at Balwyn High for only one year, 1962, when I taught in English, Humanities and Maths.

One of my aims was to refurbish the school magazine in style and content, a goal which was managed with the aid of a talented magazine committee of senior students buoyed with enthusiasm. Thus the magazine “Buchanan” was born, planned to be an annual product: though leaning more towards the model of a Year Book.

However  I found myself promoted by the Education Department as senior master to the new and nearby Banyule High School, on the verdant banks of the Yarra River near Rosanna. I spent six years helping that school to grow and thrive, a high point in my career.

I had become aware that my teaching was more and more infused with current social issues, and also aware of the new discipline called Sociology, common in the U.S.  I took a teaching position with the Victorian Institute of Colleges, and set my goal of graduate studies. The college also felt a need for growth in the social sciences and made possible my travel and enrolment in a Masters Sociology program at the University of Colorado at Boulder in the U.S. I graduated MA in 1971.

I was then persuaded to continue into doctoral studies in sociology for two more years—graduating finally as PhD in 1974. This culminated in my appointment at Caulfield Institute of Technology as Head of Department of Applied Sociology , which has since been absorbed by Monash University at Clayton. I remained in that post until retirement in 1986.

My retirement has been spent in writing (and self-publishing under my own Imprint Macron) heritage and historical research in north-east Victoria; composing cryptic crosswords; and sharing interests with my partner Geoff Allingham, who—while I was teaching at Balwyn High— was teaching Art at Heidelberg High School. Geoff and I have been together for 64 years, now in a registered relationship. (Note of interest…My Banyule High School was demolished several years ago, and Heidelberg High is under present demolition.) 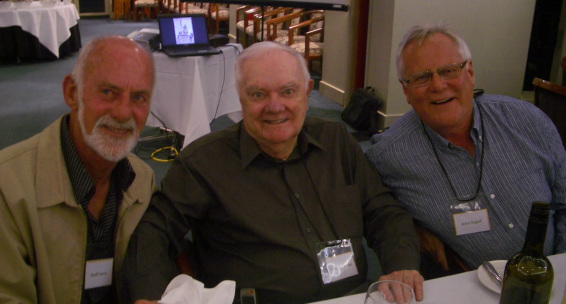